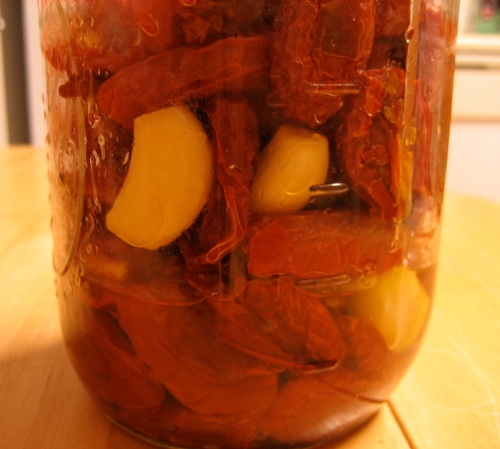 My mother-in-Lawlor gave me the wonderful idea of “sun-drying” part of my 30 lb. patch of tomatoes in the oven.  I cut up my tomatoes and placed them on an ungreased baking sheet.  I put my oven on the lowest heat possible, which was 170 degrees, and I left the tomatoes in there for about 7.5 hours.  You’ll see the tomatoes start to shrivel up and resemble those expensive, sun-dried tomatoes that you can purchase in the grocery store.  After finishing baking them, I placed them in a quart-sized mason jars along with 4 cloves of garlic and about 1/2 cup of extra virgin olive oil.  The garlic and olive oil will give the tomatoes an added boost of flavor as well as keep them moist.

There’s endless possibilities of what you can use your sun-dried tomatoes for.  My husband was kind enough to bake us a pizza (homemade dough) with mozzarella, sun-dried tomatoes, and basil for dinner last night since I was not feeling well.  It came out beautifully and the sun-dried tomatoes gave the pizza an added boost of flavor as well as texture.  This is so easy… definitely try this out if you have an excess of tomatoes that you need to use up!

One response to “Homemade “Sun-dried” Tomatoes”